Each day is an adventure in learning.

We asked our educators to share observations of  girls in program through the lens of the Barnacles & Bees values listed on our "About" page. We're proud to provide the foundation for so many girls and look forward to the long-term effects of our program on their lives.
Educator, Jamaal Ali:
Over the past few years of teaching for Barnacles & Bees I have seen some amazing progress in my students. I have seen the meek and shy become leaders, I have seen students who first ran from every bug, turn into some of the finest bug catchers I have ever known. I have seen students try and try and try again until they climb that stump, or build that shelter, I have seen fir branches and ivy vines become bows, paintbrushes, fishing rods and swings. But most of all I’ve seen kids and parents alike starting to care for the natural world around them and start thinking about how they can help keep it clean and beautiful.

This year I witnessed a student named H. start our program. I don’t think she said a word to anyone for the first two months. Eventually she became comfortable and began to start participating in games and forming groups and friendships, then she became one of the leaders of our class. She was always there to help another student, help them find materials, assist with projects, and comfort those who needed it. She was also the first in our class to earn her fire badge, a badge of honor given to those who are able to safely and correctly start a campfire. The change in her was amazing and the confidence that this program gave her even carried into her time at her other school and home life.

Another student who I’ve seen blossom this year is C. At first she would just sit at a picnic table, only getting up to be near her twin brother. She hated getting any kind of dirt or mud or anything on her and would absolutely melt down if her hair got messed up. Two weeks later and she was the first one down in the mud crawling through like a worm. Her thirst for knowing how the world works is also amazing. Her curiosity and sense of wonder just lead her to ask some of the best questions that I’ve ever heard. Wanting to know everything about the world around her and how it works.

When I think about conservation, I immediately think of D., her heart is so big that she cares so much for every living creature, big and small. She is my resident bug catcher and makes a new friend every time we are in the forest or at the beach. She has saved countless creatures from dangers and always is trying to not only save the creatures but gain followers to help her as well. She has told so many parents how they can help save the smallest creatures at their homes and how to help clean up nature.

Educator, Robin Cockrel:
One thing that all of the females in my class share, and others (R, V, P, A, H, J….) is that, in a program with no walls, they have to make boundaries for themselves. They have to be proactive, saying “No” and “Yes”, making a choice for themselves. There have been some very defining moments for our girls where they have the confidence of their place in the community to say “No” when they don’t like something, and making that heard as many times as necessary.

G (5)
Confidence, creativity, and community, and inclusion
This is a girl who came into the program and would scream at the very site of a bug, and that was at a distance. She grew to be a bug whisperer! Letting them crawl all over her and seeking them out in their natural environment to hold and observe. Her fear of the unknown (especially on beach days) ebbed and flowed, but G was never completely deterred from seeking- something continued to draw her forward.

G became not only resilient with insects, she became resilient to the cold weather that at first would take all enthusiasm for her. On one day in particular,  a turning point for G. EVERYONE else was experiencing wardrobe malfunction: wet, cold, and needing support. G was a rock, and found the space to encourage her friends that were upset. While the rain poured down around the shelter, it was G who looked at the space between the posts that looked out onto the water of the Puget Sound and likened it to a TV. She invited anyone who wished to imagine alongside her.

At first, she would be timid and quiet about sharing her ideas. When stories around the fire started, G began to spin stories and share her own life experiences in a trusted group of friends. By the end of the program she became a pillar that all kids knew and trusted to help them out. She was actively engaged in building community by bringing pictures from home to all her friends on the life-cycle of fairies. Her father being deployed for long chunks of time G wrestled with strong feelings while at program and found a space to sit with those feelings in quiet, in her own familiar sit spot. She had the flexibility to be as involved as she liked in those difficult times, and had the constancy of the woods and her educators to be there for her, no matter what she was feeling. In these moments of her being still and quiet, G developed her observation skills of bird watching, and noticing small sounds around her, whereas before she would pass by. She grew more confident in waiting for creatures to come to her, instead of having to go out and search for them herself.

Finally, and perhaps most importantly, G, like so many of our older girls in program, model for our younger girls on how to be leaders, how to be creative problem solvers, how to contribute, and how to be fearless.

M (4)
Curiosity for her own enjoyment:
When I think of curiosity. I think of M: her slugs and hiking pace.
She will not be hurried, and she will not be limited to the amount of slugs that can be on her hands. I have never seen so much slime, nor slugs twist out of grasp in such a way. M would spend long periods of time observing and just taking in these slugs. She'd have a family of them on her hands and just spend time with them. Much the same for when there are hikes that happen in the program, M will not be rushed, she will take all things in at her own pace, and if you were to walk with her you would get to practice the joy of moving slowly and taking it all in–savoring your time outside. When she discovers something new, she is willing to share her discoveries with others nearby, but can also be seen enjoying the private moment to herself. M shows me, as well as G’s time alone, that you do not need to be the life of the party–or even join the party, you do not need to be social cause it seems to be what everyone else is doing. Finding time spent with yourself, and doing what you enjoy, like nobody's watching is valuable.

R (4.5)
Confidence:
There are those kids in the program that stand out as leaders right away, and that come in having confidence to lead imaginary play, and create a plan. Then there are younger siblings that step into a world where they are smaller, and follow their stronger, older, more experienced brother/sister. Try to keep up to what they do, stay close to them so they feel safe. One of the tiniest in the program at first, R spent her early days trying to catch up to the pack and finding a way to be involved. When the group would work together to haul a massive cart up the hill as a team, R for a long while would disqualify herself for helping because she was too small and there was not enough space for her to edge. When given the opportunity R shoved in and MADE space for herself and contributed all the force that she could muster. Slipping and falling multiple times she got right back up and  kept hauling up the hill.

Creativity / Community: At this stage in life, it can be difficult to see what role you can play in a group, and how to involve yourself in the community. The answer? Imaginative play. Often in R’s class, an older girl would organize a game where all the kids were animals. It was easy to contribute by being a unicorn or dragon and join in the running around and acting out wild animals behavior in a wide open space, without having to do the vulnerable task of asking whether or not she could play with them. If you can be a wild animal, you're in! For R, it took away any inhibitions of what “play” looked like, and what she had to do right in order to be involved.

H (age 9)
Conservation
H has single-handedly created a task force for ripping the ivy off of trees and collecting fallen rain water. These tasks are labor intensive and not everyone has that kind of stamina. It leads H to accept any and all help, she is not exclusive in who is able or who she gets along with. H accepts all abilities to join the squad if they have the enthusiasm and mobilizes their energy to fill every possible jug with rain water that she can, so that we can water plants in the summer. She inspires the younger members of our group to tackle big challenges, and is committed to seeing a project through without being distracted. ​ 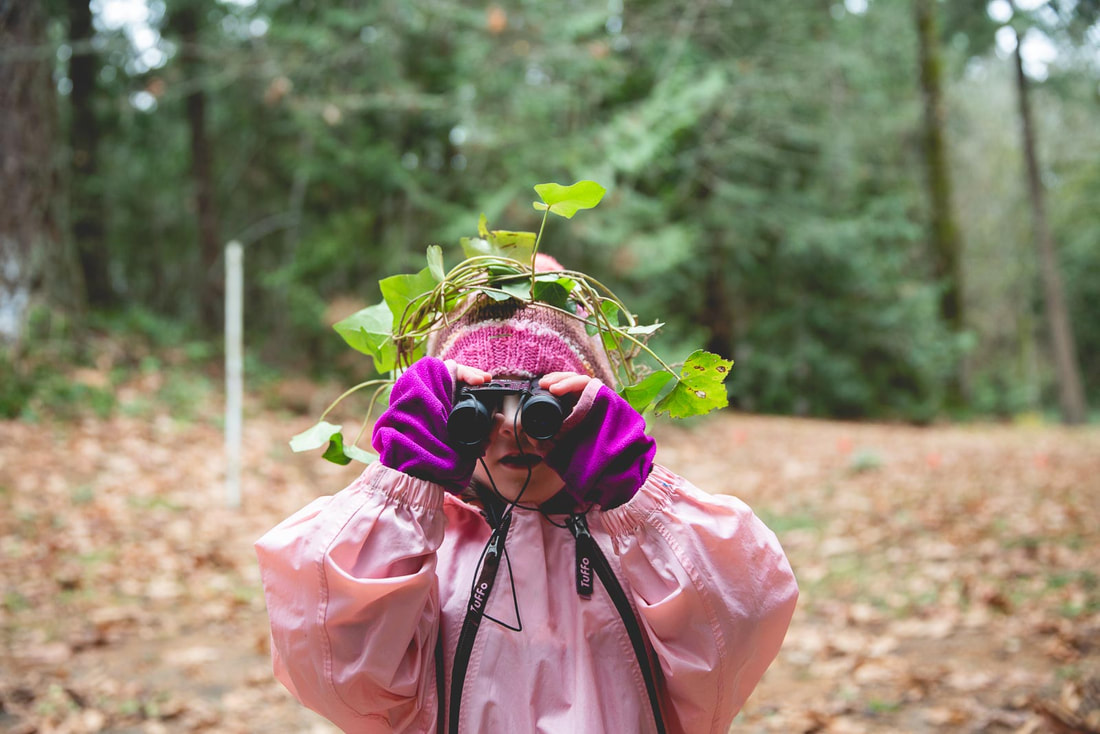